Ingo Fischer completed his apprenticeship as a cook at the Donau Hotel in Ingolstadt in the early 90s. His first engagements were
in Nuremberg. During the 90s he worked at various high-class restaurants in and around Nuremberg, for example the Restaurant "Funk" in Nuremberg-Langwasser and the Restaurant "Bammes" in Nuremberg-Buch. He gained renown by being involved in the very popular Restaurant "LORENZ". Another highlight on his resume is his stint on the cruise ship Crystal Symphony, on which he previously visited the Scandinavian Peninsula. At the end of the 90s he started his own business. 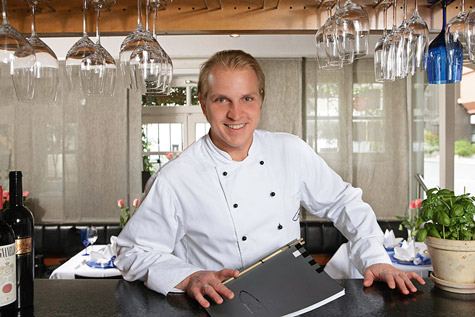 His restaurant, Restauration Fischer, now exists since 2003 in a hidden corner of the historic city centre of Nuremberg. The historical little house in Schottengasse is an impressive relict of the art of traditional studwork construction, and often of great interest to passing tourists. In the 16th century city block where it is situated, Ingo Fischer has "cooked up" a name for himself. Not only locals, but connoisseurs and famous persons from all around the globe value his work.

Whenever he has some time on his hands, Ingo Fischer relaxes on the golf course. For a couple of years now, this has been his favourite pastime which allows him to relax and gather new energy and creativity. As huge pet lovers, he and his wife saved two dogs from foreign dog kennels.